From J Wiki
< Addons
Jump to navigation Jump to search

The main purpose of this addon is to compare and contrast the different GUI building technologies available for J. 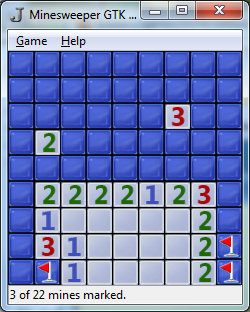 The following UI implementations are available:

Use Package Manager to install the games/minesweeper addon.

Below are some examples of running various UI versions. Obviously you can only run some scripts in a compatible environment, so the uiwd.ijs script can currently be run using only J6, and the gui/gtk based scripts will run only in J7.

The engine for this game began as a solution to a RosettaCode programming task. It then seemed to be a nice simple application that might serve as a type of Rosetta stone itself, showing how to translate a GUI from the J6 window driver (wd) toolset to the new J7 Gtk toolset.

As J tools and Application Program Interfaces for working with Gtk evolve, the Gtk scripts should hopefully get shorter and less complex.

Ideas for extending the game: